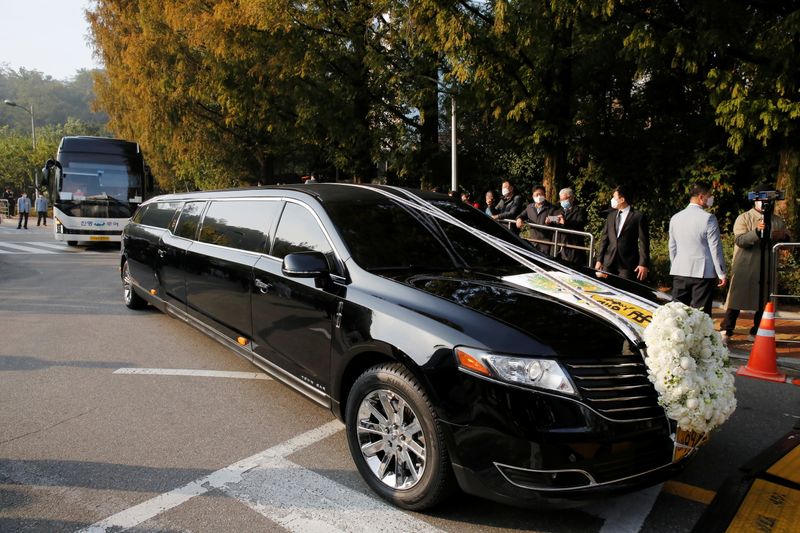 © Reuters. A hearse carrying the body of Lee Kun-hee, leader of Samsung Group, travels at a hospital in Seoul

SEOUL (Reuters) – The family of late Samsung Electronics (KS:) chairman Lee Kun-hee held a funeral ceremony on Wednesday for the patriarch, whose death on Sunday threw into question the control of the chipmaker and the country’s largest conglomerate.

After a morning ceremony closed to the media, family members, including Lee’s son Jay Y. Lee, boarded a bus, which left the Samsung Medical Centre, where the funeral services had been held, local media Yonhap News TV channel showed.

Afterward, a large black funeral car topped with a white wreath believed to be carrying the casket of the late Lee left the hospital.

The funeral car is expected to pass by sites that held meaning for Lee, including his home in central Seoul and Samsung Electronics’ chip-production facilities in Hwaseong and Giheung near the capital before arriving at a family burial ground, Yonhap news agency reported.

Lee, who built Samsung Electronics into a global powerhouse in smartphones, semiconductors and televisions, died at 78 after spending more than six years in hospital following a heart attack.

His passing raised expectations for stake sales and a potential restructuring of the sprawling business empire, as the family grapples with an anticipated inheritance tax bill of nearly 10 trillion won ($9 billion).

Disclaimer: Fusion Media would like to remind you that the data contained in this website is not necessarily real-time nor accurate. All CFDs (stocks, indexes, futures) and Forex prices are not provided by exchanges but rather by market makers, and so prices may not be accurate and may differ from the actual market price, meaning prices are indicative and not appropriate for trading purposes. Therefore Fusion Media doesn`t bear any responsibility for any trading losses you might incur as a result of using this data.

Fusion Media or anyone involved with Fusion Media will not accept any liability for loss or damage as a result of reliance on the information including data, quotes, charts and buy/sell signals contained within this website. Please be fully informed regarding the risks and costs associated with trading the financial markets, it is one of the riskiest investment forms possible.

For decades, income-minded investors have searched for the best dividend stocks out there. In my experience, the main criteria...

We talked to Jake Paul, who is currently going Super Saiyan