New Highs In Copper Send A Signal To Markets – DBB Is The Base Metals ETF Product (NYSEARCA:DBB)

In mid-July, COMEX copper futures were knocking on the door at $3 for the first time since June 2018. In a piece on Seeking Alpha, I wrote, “If 2008 is a model for 2020, any price weakness would be a buying opportunity for copper and the base metals that trade on the London Metals Exchange.

Since then, the red industrial metal traded as low as $2.7690 and as high as $3.2180 per pound. The peak in October the highest price since 2018 when copper reached $3.3155. Copper has made higher lows and higher highs since March 2020, when it found a bottom at $2.0595. Many other base metals that trade on the London Metals Exchange have moved appreciably higher with copper.

Copper, aluminum, nickel, lead, and zinc forwards trade on the LME. The most liquid markets are in aluminum, copper, and zinc. The Invesco DB Base Metals Fund (DBB) holds positions in the three metals with the most trading volume. DBB was trading at $13.61 per share on June 30. On October 27, the ETF product was over 15% higher at the $15.67 level.

At the end of September, copper inventories on the London Metals Exchange suddenly spiked higher. 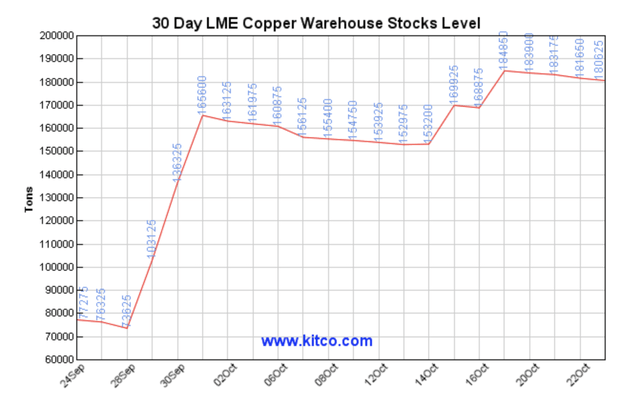 The initial increase in stockpiles sent the price of copper significantly lower.

As the daily chart of COMEX copper futures illustrates, the price fell from $3.0465 on October 1 to a low of $2.8345 on October 2 as the increase in inventories weighed on the red metal’s price.

In a sign that the stock increase could have been orchestrated by a dominant market participant to push the price lower to buy, copper exploded to the upside following the decline to the lowest price since mid-August. There is no dominant player more influential than the Chinese as they are the demand side of the fundamental equation in the copper and base metals markets. China is not only the leading buyer of copper and industrial metals but also owns the London Metals Exchange. Chinese traders are beyond the reach of regulators in Europe and the United States. The stock movements and price action had the aroma of market manipulation as the price of copper turned higher after the brief move to the downside. On October 21, less than three weeks after the price carnage, copper reached a new high of $3.1280 per pound on the December futures contract.

The red metal sends a signal to all markets

Copper’s nickname is Doctor Copper,as it has a history of diagnosing the overall health and wellbeing of the Chinese and global economies. Therefore, the sudden spike lower and even more dramatic rebound was an impressive sign for all raw material markets.

Copper and other commodities have a lot going for them these days. Unprecedented levels of central bank liquidity and government stimulus programs to battle the economic fallout from COVID-19 increase the money supply, which is inflationary. The world’s leading central bank, the US Federal Reserve, told markets it is prepared to tolerate inflation above its two percent target rate.

Meanwhile, the dollar is the global pricing benchmark for most raw materials, and copper is no exception. A falling dollar tends to support higher prices. The dollar index has declined from 103.96 in March 2020 to below the 93 level as of October 27. Copper is a bellwether commodity, and its rise is a significant event. Moreover, the bounce after the increase in stockpiles and the continued strength that took the red metal to a new and higher high on October 21 is a signal for the commodities asset class.

Copper began to rally from the ashes in March after falling to the lowest price since mid-2016. As the price of the nonferrous metal rose, other commodity staged substantial comebacks. Crude oil emerged from its move into negative territory to consolidate at the $40 per barrel level. Gold rose to a record high of $2063 per ounce in early August and was trading at over $1900 per ounce on October 27. Silver had declined to its lowest level since 2009 at below $12 per ounce only to recover to the highest price since 2013 at almost $30. Silver was north of $24.50 on October 27. Lumber traded to $1000 per 1,000 board feet in September, blowing away its previous record high of $659 from May 2018. Even agricultural futures markets have moved into bullish trends over the past weeks, with corn, soybeans, and wheat prices trending higher. The price of wheat, the primary ingredient in bread, rallied to over $6 per bushel for the first time since 2015 and to the highest price since 2014 in October. The commodities asset class has been in bullish mode, with prices making higher lows and higher highs. China is the world’s most populous nation, with over 1.4 billion people. The Asian country is the demand side of the equation for all raw materials. As the prices of commodities rise, the Chinese continue to pay more to meet their requirements. All signs are that the Chinese economy has been powering higher despite the global pandemic.

Copper moved from a low of $2.0595 in March to $3.2180 earlier this month, a rally of 56.3%. The two other liquid base metals that trade on the LME have also moved significantly higher since the March low. 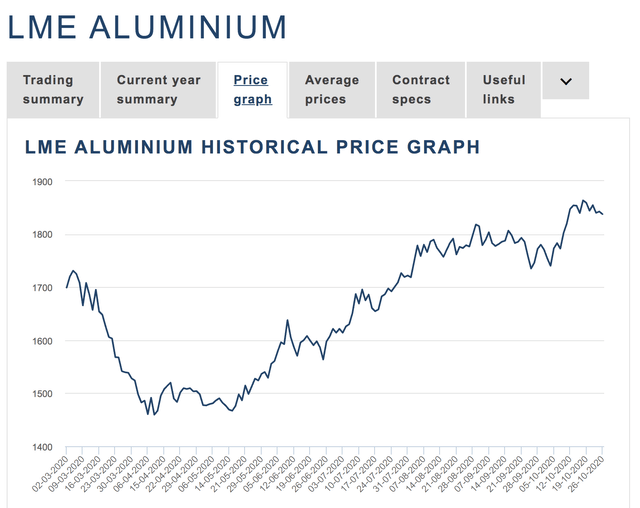 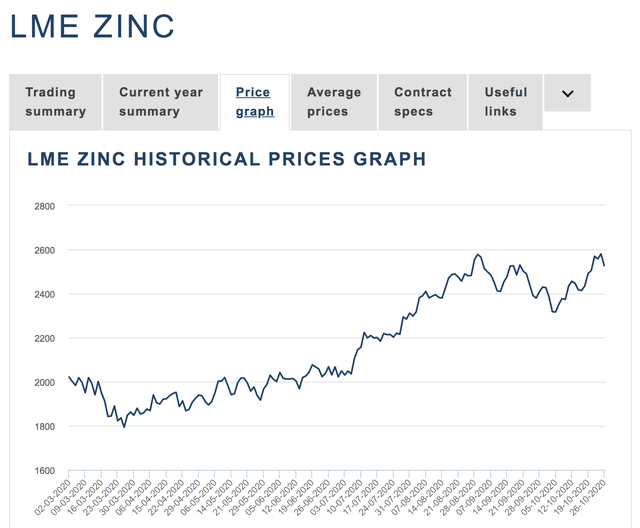 Three-month zinc forwards on the LME moved from a low of $1793 per ton in March to the most recent high of $2580 in late October or 43.9%. Copper is the leader of the base metals, and aluminum and zinc prices have followed the base metal higher over the past seven months.

Levels to watch in the red metal

From a technical perspective, copper remains in bullish mode as the end of October approaches.

As the monthly chart highlights, there are two critical levels to watch in the copper market over the coming days and weeks. From a short-term perspective, a close above $3.1120 per pound on Friday, October 30, would create a bullish reversal on the monthly copper chart. Meanwhile, critical technical resistance stands at the December 2017 high of $3.3220 per pound. Above there, the December 2013 high of $3.4445 is the next level on the upside. The all-time high for the red metal came in February 2011 at $4.6495 per pound.

The monthly chart shows that the total number of open long and short positions in the copper futures market has been rising with the price. Increasing open interest as the price rises tends to be a technical validation of a bullish trend in a futures market. Price momentum and relative strength indicators are rising towards overbought conditions. Monthly historical volatility at around 26% is near the highest level of 2020 and since 2017. The measure of price variance reflects the widening monthly price ranges. Copper’s technical position remains bullish. A close above the $3.1120 level this Friday could ignite another wave of technical buying in the red metal.

The fund summary and top holdings of the DB Base Metals Fund (DBB) include: 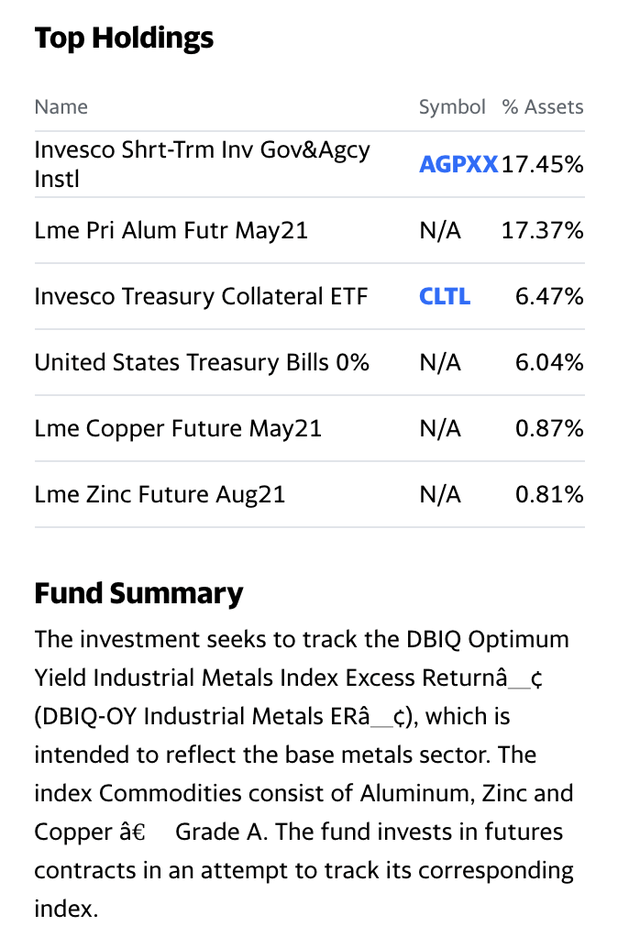 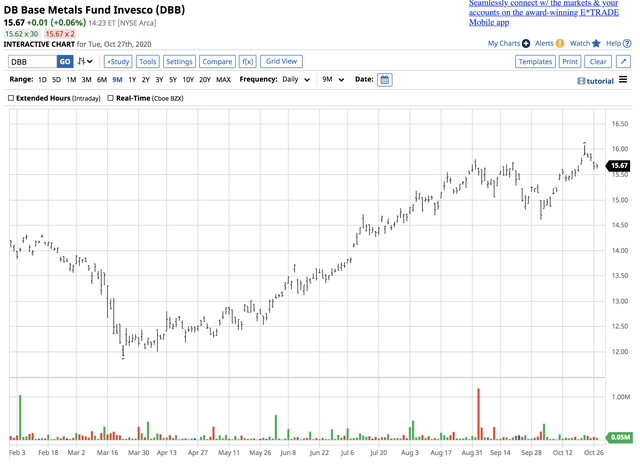 The most direct route for a risk position in the three base metals is via the futures and forwards on the LME and COMEX. For those looking to participate in the bullish trends in the base metals., the DBB product offers an alternative.

I continue to believe that the global economic landscape supports much higher copper and base metals prices over the coming months and years. I will be looking for price dips to hop on board the bullish trend in the nonferrous metals.

Please join me in sending prayers and best wishes to Eli Hoffman, the CEO of Seeking Alpha, for a speedy recovery.

The Hecht Commodity Report is one of the most comprehensive commodities reports available today from the #2 ranked author in both commodities and precious metals. My weekly report covers the market movements of 20 different commodities and provides bullish, bearish and neutral calls; directional trading recommendations, and actionable ideas for traders. I just reworked the report to make it very actionable!

Disclosure: I/we have no positions in any stocks mentioned, and no plans to initiate any positions within the next 72 hours. I wrote this article myself, and it expresses my own opinions. I am not receiving compensation for it (other than from Seeking Alpha). I have no business relationship with any company whose stock is mentioned in this article.

Additional disclosure: The author always has positions in commodities markets in futures, options, ETF/ETN products, and commodity equities. These long and short positions tend to change on an intraday basis.

LendingClub Corporation (LC) operates an online lending marketplace platform that connects borrowers and investors. The stock performance since its...

With the shekel approaching NIS 3.30/$, traders reported that the Bank of Israel has bought hundreds of millions of...

India vs Australia ODI: Virat Kohli hits out at own team for failing to get into one-day mode

India vs Australia ODI: India skipper Virat Kohli hit out at his team for not getting into 50-over format rhythm...

Inside the Kardashian-Jenner Family’s Thanksgiving: Pics

Inside the Kardashian-Jenner Family’s Thanksgiving: Pics

N Ireland police to pay damages to journalists over arrests

A January 1 start date for the NHL seems impossible now

Britain presses on with AstraZeneca vaccine amid questions over trial data