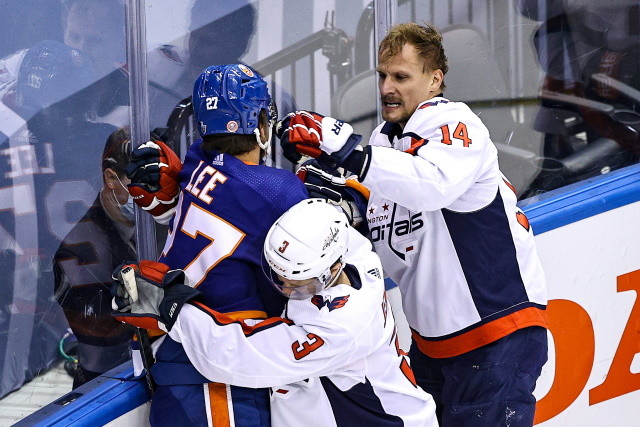 “The situation is I’m going to stay and hopefully make the team,” Byfield said Thursday. “That’s the plan I talked about with the Rob Blake, and I think that’s the best option for us. I’ll head over (to the Kings) after I’m done .”

Team Canada training camp has started, with the tournament running from December 25th to January 5th. It’s being held in Edmonton.

Two trade candidates for the Capitals, but they won’t be easy moves

Tom Gullitti of NHL.com: (mailbag) With the Washington Capitals in a bit of cap crunch and possibly having too many defensemen, could they trade defenseman Nick Jensen or forward Richard Panik? The Capitals have admitted they know they don’t have much cap space or flexibility. After signing right-handed defensemen in Justin Schultz and Trevor van Riemsdyk, the right-handed Jensen is expendable.

Trading Jensen may not be easy. He has three years left on his contract at a $2.5 million cap hit.

Trading Panik wouldn’t be easy either for the Capitals. He has three years left at a $2.75 million salary cap hit.

The Capitals would like to add some scoring depth to their third-line. They may need to attach a draft pick or prospect with either player to get a team to take on the contract.

DNC Official Suggests Re-Education For Trump Voters – ‘How Do You Deprogram 75 Million People?’

Anyone got an info on this? Anything would be appreciated (: : hockey

Looks like it was sent by Wye Isety and Wayne Gretzky. Everybody knows who Gretzky is, but I don't...

Who will be Canada’s best NHL team next season?

The All-Canadian division looks to be a sure thing and with that comes predicting the best and worst teams....

Welcome back to another edition of Throwback Thursday! This week in 1958 (Nov. 21), the Toronto Maple Leafs hired...

Lauri Pajuniemi added another goal yesterday for TPS, and now has three goals in the last four games. Pajuniemi...

DNC Official Suggests Re-Education For Trump Voters – ‘How Do You Deprogram 75 Million People?’