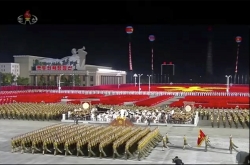 Everyone loves a good parade, North Korea included. And the military parade in Pyongyang on October 10 to commemorate the 75th anniversary of the founding of the Workers’ Party of Korea did not disappoint. It included intricate troop formations, an array of military equipment, lights, cameras, drones, and even fireworks. And the middle-of-the-night setting created the perfect dramatic backdrop for Kim Jong Un to show off shiny new things as symbols of the country’s strength and perseverance despite the hardships of 2020.

And show off he did,…

Why Trump’s Confident in Reelection and Reopening

The October (or November) Surprise Neither Trump Nor Biden Wants

As the Navy develops an unmanned campaign plan, its focus is on commonalities

The U.S. Navy is developing an unmanned campaign plan that will prioritize commonalities across the service’s ever growing portfolio...

To gain an edge on hypersonic weapons, the Pentagon wants more help from universities

WASHINGTON — As the Pentagon races to develop hypersonic weapons, it is turning to universities for help on speeding...

US Army gets first Infantry Squad Vehicle from GM Defense

WASHINGTON — The U.S. Army’s new top military IT official has its eyes on several priorities to ensure that...

Why Trump's Confident in Reelection and Reopening